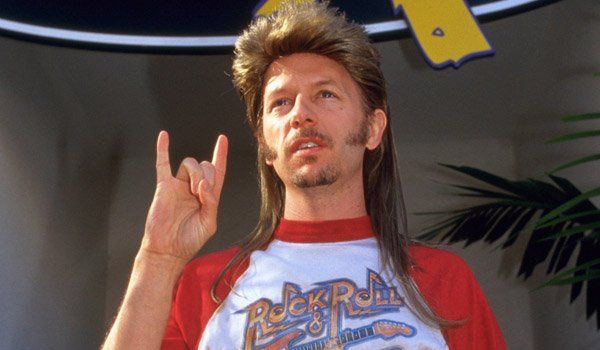 In 2001, the adventure comedy Joe Dirt was released. The main character is a janitor named Joe Dirt, looking for his parents after losing them in the Grand Canyon when he was only 8 years old. Even though he finally cannot find them, he finds solace in the new acquaintances he meets along the journey.

While David Spade’s portrayal of Joe Dirt is the film’s main attraction, it also has a unique quality because of the mullet he sports as a helmet throughout the narrative.

Joe Dirt mullet is the common mullet with an amazing blowout on top. It has a signature “Business in the front, party at the back” vibe. While Joe Dirt’s mullet will always be a classic within the community of many enthusiasts, it has made way for other mullet hairstyles that are currently gaining popularity in the fashion world.

If you’ve always loved the mullet, finding this article may have been intended for you. Here are all the versions that are similar to the Joe Dirt mullet, from early 1990s mullets to high-spirited mullets.

You can create this fantastic mullet by embracing the natural flow of your hair. This hairdo, in contrast to Joe Dirt’s mullet, requires no hair treatments and only takes a few minutes to install. It is the ideal appearance to rely on in casual circumstances and a reliable choice to make at semi-formal parties.

Joe Dirt Mullet with a Quiff

The modern mullet with a softly textured quiff beside the Joe Dirt mullet is aesthetically beautiful. It is a look that fits the occasion. Comb the hair while the strands are still only slightly damp to form the quiff. If your hair is prone to breaking, you should use a wide-toothed comb, though you can also use a detangling comb to give the appearance of greater fullness.

Sporting colorful haircuts are becoming popular these days. A pastel pink mullet is now making quite the stir. Although it is optional, the fade helps to make even the finest head of hair appear fuller and tends to enhance contrast. Additionally, it complements the color perfectly and makes the hairdo look cleaner.

While most Joe Dirt mullets feature straight hair, you can rock one with curly hair, too. Along with embracing your curls and giving your face a flattering appearance, this look lets you be experimental with your outfit. To seal the volume and texture, use curling cream for the best results.

How can you give yourself a Joe Dirt Mullet?

Once you have grown long enough hair, you can follow this guide to give yourself a Joe Dirt mullet:

Use a 6 mm guard or a 3 guard along the sides to give the sideburns more structure and the hairstyle as a whole a cleaner look. The taper will not only improve the look but also slightly increase the density on the top.

Chop off the split ends.

Joe Dirt’s mullet is not only voluminous and healthy. Although it has a wig-like appearance, you can reflect this element in real life by asking your hairstylist to separate each strand and cut the ends. The strands will now be easier to style and maintain in addition to looking healthier and cleaner.

Pre-style the hair after dampening it.

Joe Dirt’s mullet is notable for how wonderfully unkempt it always appears to be. While it appears natural from a distance, only hair products can give it consistency and rigidity. To make the hair easier to work with, make sure it’s slightly damp before applying any type of hair product. Additionally, while using hair serum would suffice, utilizing sea salt spray and hair mousse will be effective if you want to mimic the coarseness and texture of Joe Dirt’s mullet.

Use a circular brush and a blow dryer to achieve the look.

Use a blow dryer to give your hair a blowout while it’s still damp to make the strands all poofy and less brittle. To achieve the glossy and tightly-packed combover, use a circular hairbrush. You can certainly achieve and settle for a gentleman’s combover by combing the hair down the middle if you’re not the biggest fan of Joe Dirt’s side-part combover.

Use hair wax and hairspray to produce texture.

Apply a dime-sized dollop of hair clay to the front and rear of the temples to give them the ramshackle appearance of the Joe Dirt mullet. Make distinctive hair streaks with your fingers, then compress the strands to give them a more relaxed, curving appearance. Apply a generous amount of hair mousse to secure the style, then let your hair air dry. Additionally, for maximum results, use texturizing powder instead of hair mousse if your hair is on the finer end. If you want a slight increase in volume, you can even apply sea salt spray.

The legacy of Joe Dirt is still very much alive thanks to the main character’s mullet, also known as “The Joe Dirt Mullet.” If you are a Joe Dirt fan, you should absolutely rock this style.

What is another name for Joe Dirt’s mullet?

Joe Dirt’s mullet was originally referred to as a Billy Ray Cyrus-Doug Flutie mullet before it became immensely popular. Although it was given the new label “The Joe Dirt Mullet” months after the film’s debut.

Is the mullet on Joe Dirt genuine?

Joe Dirt was actually donning a wig the whole time. When the movie gained popularity in the early 2000s, Joe Dirt’s mullet was unquestionably the star of the show. The mullet was artificial, a little-known detail that neither the creators nor David Spade himself revealed until 2010.

What is Billy Ray Cyrus mullet?

Joe Dirt mullet would not have even existed without this hairstyle. Billy Ray Cyrus, a successful musician, and father of Miley Cyrus became popular for the song “Achy breaky heart” when it was released in 1992. He also gained notoriety for sporting a mullet at the time. It was so unique that his mullet even got its own name for a while.