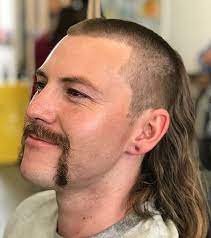 Bald mullet is probably not worn by many people because they require a lot of self-assurance to pull off. The name of the style, which is a cross between a mullet and an appearance that draws attention to your skull, comes from the fact that the sides and top are frequently shaved.

There are several distinctive ways to wear bald mullets. We can all agree that you will draw a lot of attention, but whether that attention is positive or negative shouldn’t matter to you.

What Is A Bald Mullet?

The bald mullet is a distinctive hairstyle, but not everyone will find it appealing or suitable for their lifestyle. Its top, sides, and length in the back are shorter or shaven, setting it apart from the terms “bald” and “mullet.”

Even though the bald mullet is not the most stylish or attractive haircut, whoever can pull it off shouldn’t care because it takes a lot of confidence to pull it off.

Getting The Bald Mullet Right

There are numerous ways to style a bald mullet, but they all have something in common. The bald mullet should appear disorganized and unkempt. This is how rebels show their contempt for social conventions. For your convenience, we’ve gathered the sexiest Blad mullet hairstyles below.

Even though it’s a mullet, styling a bald one isn’t impossible. To make your hair stand out in the crowd, braid it in the back and add some fancy beads. You have the option of going bald at the top of this mullet, a fade, a taper cut, or both.

Mutton chops can be worn in a variety of stylish and audacious ways. A more understated, well-groomed appearance is the best choice for counteracting your bald mullet. You can accomplish this by regularly trimming the sides and preventing them from growing too bushy. While it may appear that no practice is necessary to maintain this appearance, it is.

A scullete is essentially a bald variation of a shaved head mullet, but by leaving some hair on top and getting the sides faded, you can make it look less odd. This makes scullets acceptable for men who find bald head mullets strange or unattractive.

If you want a daring hairstyle, are a self-assured man and don’t mind people staring at you or rather looking at you, the skullet is for you. Because it suits curly, straight, and sleek hair types, the style is fantastic. There are many benefits to having straight hair. For instance, it frequently reflects light and has a glossy, shiny appearance. It can grow longer and more readily and is frequently more hydrated than some other textures.

If you have very long hair and want to update your hairstyle without losing the length, a skullet is a way to go. After that, shave the top of your head and style your hair into a stunning ponytail.

If you go with the audacious skullet hairstyle, people will notice you. So why not use striking colors to draw attention in a big way? Brightly colored hair is an excellent way to express yourself and show off your playful side. Typically, applying vivid shades to light hair yields the best results. It is pricey, can fade quickly, and will draw attention to damaged locks. Only those with the healthiest hair should dare to try this solution for this reason. Bright-haired people usually have a unique sense of style, don’t mind being noticed, and hate trying to fit in. Your personality can be greatly revealed by the color of your hair.

A taper fade simply looks amazing on mullets. It enhances the appearance of your haircut. You can also change the boldness level to the desired level.

If you like risky or daring things, a skullet with long hair is your best bet. This intriguing cut is neither mainstream nor wildly popular; it is only for those seeking something distinctive.

It’s a choice that either demonstrates your lack of concern for what others think or suggests you may be a fan of a particular subculture, such as punk or grunge. Long hair with this cut has the benefit of being simpler to style. A different choice is to go to the hair salon less frequently.

By using a special dye, you can give your buzz-cut mullet more definition. A two-toned skullet in complementary colors will make it easy to draw attention to your hairstyle.

A bald mullet will stand out more if you have curly hair because of the texture contrast between a shaven head and a curly style in the back. One advantage of having curly hair is that it stands out and goes well with many different styles. The need for specialized shampoos, the possibility of knotting or tangling, and the tendency to frizz in hot, muggy weather are some disadvantages. Accept that the purpose of the back of your hair is merely to highlight your curls and incorporate a curl-defining product into it.

Contrary to what most people think, mullets look great on hair of all textures, not just straight hair. Mullets can be styled in a variety of ways, including variations with waves and curls. An arresting example of this is an Afro skullet. It looks good and is fashionable. Additionally, it effortlessly tames your wild kinks.

If you want a style that is sure to draw attention, bleaching your hair is the way to go because bright blonde hair is one of the most attention-grabbing colors. The color’s intensity will draw attention to your haircut and highlight your sense of style because it is so striking.

Shave in a line on the side to emphasize the impact of your skullet mullet haircut. In addition to defining your hairstyle, you’ll be able to make a daring fashion statement.

One of those hairstyles that will make you stand out in the crowd wherever you go is a bald mullet. Give yourself a fresh cut immediately if this is what you’re aiming for. After all, your hair will regrow quickly if you change your mind.