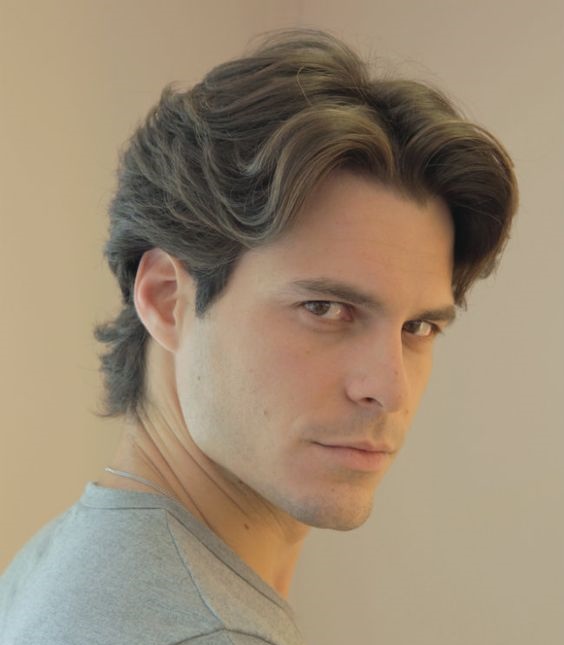 TikTok’s predilection for middle-parting over side-parting has not been subtle. While we won’t go so far as to claim the side part is completely dead (it is, after all, a classic style), we do understand Gen-preference Z’s for the face-framing middle-part fringe. And based on the current hair trends for 2022, we believe they may be onto something.

The mullet is a fashionable men’s hairdo that has made a reappearance in recent years when it comes to popular haircut trends. Mullet haircut was one of the most famous haircuts for boys in the 1980s, frequently described as “business in the front, party in the back.” The mullet looks well on thick, straight, wavy, or curly hair and may take your style to the next level for a sleek and contemporary look.

Mullet hairstyles for guys have had a poor reputation for a long time. Ask someone what they think is the worst hairdo ever, and a mullet is almost always the answer. However, in recent years, there has been a fashionable resurrection of this problematic appearance, particularly among K-pop boy groups. So, if you’re on the fence about changing up your hairstyle this year, here are some of the best middle-part haircuts for guys to try and it can possibly persuade you to try something new.

There are various elegant mullet hairstyles to select from, depending on whether you want a traditional or trendy look. Some men like a mullet fade with short hair for a low-maintenance look, while others prefer a longer mullet with tapered sides for a fashionable look. Whether you like softer mallet haircuts or want something dramatic to fit your outgoing attitude, there’s a men’s middle-part mullet haircut for you! Explore these trendy middle-part mullet hairstyles for short to long hair to get the best look for you!

Hairstyles from the 1990s are making a big comeback this year. And the middle-part millet is quickly becoming a popular hairstyle. The ’90s middle part was popularised by Leonardo DiCaprio, Brad Pitt, and Backstreet Boys’ Nick Carter. Many current influencers, such as YouTuber George Adam and K-pop 4th-gen IT guy Yeonjun from TXT, wear the look.

You can opt to wear your bangs straight like Yeonjun. Alternatively, like George, you can go for a more windswept look by curling your hair upwards with a hairbrush and hairdryer.

Curtains by E-Boy/Levi Ackerman with Undercut

The traditional e-boy curtains hair looks a lot like the ’90s middle-part haircut. The sole distinction is that e-boy hair has a somewhat longer fringe that ends below the cheekbones. Ask for an undercut with this curtains hairstyle for guys so that your fringe can be the center point.

Most e-boy bangs are cut the same length, as seen on TikToker Noen Eubanks. However, if you want a layered style, consider the Levi Ackerman haircut. His curtain fringe is more V-shaped and has increasing layers, with the maximum length at the front.

Blow-dry and comb your fringe to the front after having the appropriate haircut to maintain it flat and smooth. Then use pomade to hold the style in place.

Jungkook’s wavy middle-part hairstyle is by far his most popular. His disheveled hair frame the sides of his face wonderfully, giving him a hotter appeal that had people drooling. If your hair is naturally wavy, this curtains hairstyle for guys won’t be too difficult for you to create. But don’t worry, straight-haired men can get this appearance in just a few simple steps.

Dry your moist hair with a towel after washing it, using gentle scrunching motions to produce soft waves. Then, to give texture to your hair, apply a styling cream followed by a sea salt spray. Tie it in a bun and set it aside for 10 to 15 minutes before applying another application of sea salt spray.

Assume again if you think the curtains hairstyle is just for guys with short to medium-length straight hair. Conan Gray’s hair demonstrates that this middle-part millet can look just as well on naturally long and curly hair. His soft mullet has progressive layers that quickly provide dimension and keep his hairdo from becoming flat. They also soften the rough angles of his jawline and disguise the width of his brow.

Taehyung (V) of BTS is no stranger to stylish mullet hairstyles for guys. Taehyung, the group’s fashion symbol, has been proudly sporting this ’80s throwback hairdo in a variety of ways. We all definitely know with his huge, curly hairstyle from his ON return. His blonde textured mullet at the Lotte Duty-Free Family Concert in 2018 was equally stunning. You’ll need a middle part to make this style work for you. Part it, use gel to control the curls and frizz, then brush the shorter sides back to emphasize the length difference. To finish the style, fluff the back and pull it over to your shoulders. All you actually need to duplicate his haircut is water and conditioner, and that’s all there is to it. If you want to add more definition to your curly tresses, you may use a curling iron. But the fewer heat styling treatments you need for your hair, the better.

Modify Your Look With a Middle-Part Mullet

Have any of these middle-parting mallets persuaded you to change your hairstyle? Let us know which type you prefer in the comments section! But it’s perfectly OK if you’re still team side-parting all the way. Nothing else matters if you’re comfortable with your own style, regardless of trends!

Mullet hairstyles for men can be cool and are no longer as tacky as you remember, as seen by the mullets worn by Korean celebrities. There are several versions of this retro haircut, ranging from soft and wavy to jagged and edgy. You could even be able to persuade your girlfriend to try one of these mullet haircuts for women and rock-matching hairstyles with you. A mullet is a bold and distinctive appearance, but it’s also a fast-growing fashion trend that even the most fashion-conscious can enjoy.

We adore how a mullet enables you to express yourself via your mane. So take some inspiration from the middle-part mullets shown here, but don’t be afraid to put your own twist on it.

Make an appointment with your hairdresser if the middle part does not seem to be complimenting your face or lying properly. While a fresh haircut is an easy solution, it’s also likely that a little off-center part will suit your face shape better.

Though middle parts are popular right now, some face types may look better with a sweeping side part or a little off-center part. Middle parts frequently lessen the slight volume that exists around the face, making tiny faces look even smaller and wide faces appear a little bigger.