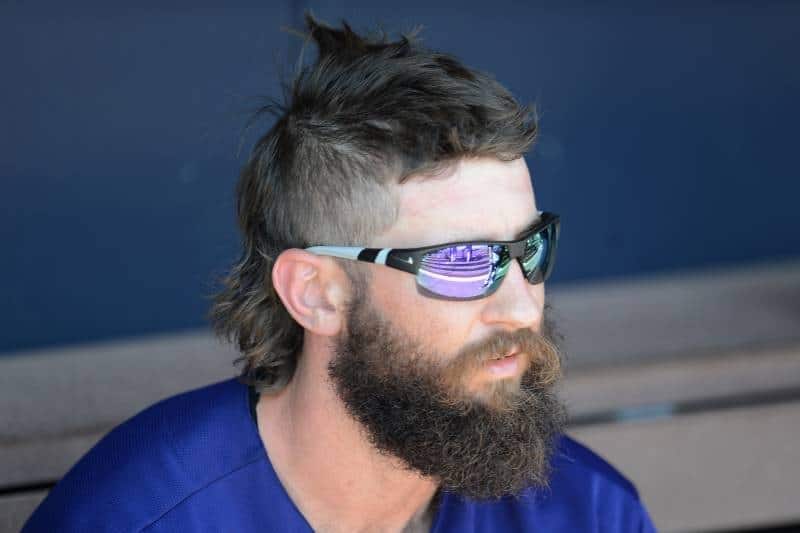 While the game has created many memories on the field for both teams and spectators, MLB players have also attempted to make new fashion trends by wearing and showing a variety of hairstyles that are regarded to be ageless these days. One particular haircut, the mullet, was so popular that it acquired the moniker “The Baseball Mullet haircut.”

Baseball is a popular sport and is loved by many around the world. Baseball, unlike other forms of sport, does not have a set deadline. The unpredictability introduced by the regulations is one of the reasons why baseball has continued to expand in popularity and fan base since its inception.

Baseball players have worn the traditional baseball mullet haircut since the 1800s, long before it became a popular ‘do among rock musicians and Hollywood stars in the 1980s.

It is one of those timeless styles that continues to grace the heads of men all around the world, especially baseball players!

What Is Baseball Mullet Haircut

The baseball mullet haircut is a hairstyle in which the top and sides of the head have short hair, while the backside of the head has long hair.

It was popularized in the late 70s and early 80s by American professional athletes. Because long hair was one of the trends at the time, sportsmen had no issue embracing the style, which sparked the drive to preserve long hair in baseball. Some of them also thought that having long, voluminous hair at the ends improved their form and performance.

Except for its stylish and laid-back aspect, the mullet was once recognized as the go-to hairstyle. It was also worn by sportsmen because of its durability.

Baseball mullet haircuts are still popular among sportsmen and fans of the sport today. While the name and goal remain the same, the layout of the design has altered slightly. Due to the severe and unpredictable weather conditions in spring, individuals are also gravitating toward a modern mullet or even shorter cuts.

Baseball players such as David Price, Jarrod Dyson, Brad Miller, and others have adopted this approach to stand out on television or at stadiums.

Because it’s baseball season, we thought it’d be a good idea to assist you in selecting your next haircut! Baseball mullet hairstyles that are voluminous, beautiful, and practical for regular use are included in the list below.

This hairstyle is suitable for all hair types. It has the ideal density and length for improving one’s physical attractiveness. This hairstyle is incredibly manageable because of its low upkeep and short length.

The color platinum has recently garnered enormous appeal in the fashion world. Indeed, the bright nature of the color helps to bring even the dullest haircuts to life. Light hues also provide volume and structure to people’s hair, which is ideal for individuals who are experiencing hair loss or have a mature hairline.

It is only popular in baseball due to its visuals and how adaptable it is during games. Because of its short length, it frequently stays in place, allowing athletes to perform without concern for their appearance. It also enhances the look of the face by bringing out the cheekbones and adding definition to the jawline.

Mullet with a Temple Fade

Baseball players frequently sport this mullet. Because players are constantly required to attend interviews and face media scrutiny, appearance is a top consideration. While appearance is important, sportsmen must also consider their comfort. This is where this variant comes into play. A mullet is not only recognized for its adaptability, but it is also low-maintenance, which is ideal for athletes who seldom have free time.

Slick Back Side Part Grown Out

This version is intended not just to add remarkable performances to one’s belt, but also to command all attention at high-end gatherings and exhibitions. It not only has a lot of density, but it also has a great appearance for those with long hair. This is because it can be combined with anything at any moment without looking out of place.

A modern mullet has seized the crown for the greatest haircut in the fashion world throughout the years by eliminating the rest of the possibilities. Unlike a standard mullet, which is more commonly worn for informal occasions, this mullet has a charm that only a few other varieties can match. Combining it with a glossy combover will not only hold the hair in place but will also make it seem immaculate till the end of time.

While afro hair appears to be bouncy and lively from a distance, keeping it might be quite difficult. Cutting the length a little and adding some spice with a fade would undoubtedly keep the discomfort at bay while maintaining the groove of the initial style.

Add hair color to the ends of the follicles to increase density and make them seem less plain. This will also make one’s haircut seem more lively, increasing appeal.

This is the look we’ve all been anticipating. For years, the hallmark look in baseball has been nothing but a cap and long hair. Over the years, players and baseball fans all over the world have pulled off this famous look.

It’s not simply the visuals that make it appealing; it’s also the sentimental worth. It is one of the most important things a person needs to properly love and appreciate the game of baseball.

That’s all there is to it! We hope that this blog about baseball mullet hairstyles has enlightened you. Baseball and the best Mullets go together like peanut butter and jelly. Every athlete that ever stepped onto a Major League pitch did so while sporting their finest 80s mullet. Some players, though, shone brighter than others. There is a select handful that has taken their baseball mullet game to the next level.

We also hope that everything we’ve covered has helped you find your new hairstyle! Your hair should be as stylish as the team you support. Combine your new amazing haircut with your favorite team’s jersey. Wear them both with unwavering pride!