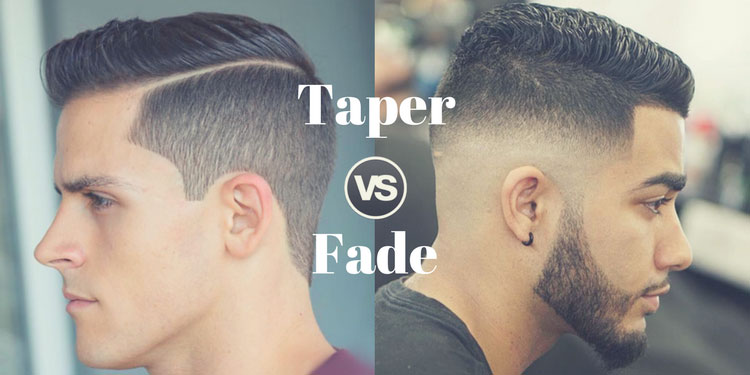 Have you ever heard men gossip about fade and taper haircuts? Do you know what the main difference between fade and taper, or are you confused about it?

Changing your looks becomes a lot easier when you know what you are searching for. Fade and Taper haircuts are considered to be the most popular choices when it comes to hairstyles in men. Especially for those who prefer a look that is more edgy. Since the two haircuts look more or less similar, it is very easy to get confused between the two haircuts. But, there are a few differences between taper and fade.

We will be taking you through the difference between fade and taper, so you know which one of the two suits you better. After reading through, you will be aware of the tapered vs fade difference without any doubts.

In tapered cuts, the hair is short towards the sides and back of the head, increasing in length towards the top. In a normal tapered cut, the top us around two to four inches long. Whereas the remaining hair is cut short. Moreover, the hairline which is around the perimeter is trimmed very short, but it is left intact completely. This is basically the main difference between fade and taper haircuts.

You would literally find women rocking this haircut as well along with the men compared to fade. Since there is not much hair that needs to be cut. It is necessary for you to have an idea as to what you are looking for when deciding between the taper and fade. Here are a few very popular trends that run in the tapered cut

Featuring long hair at the top of the head and at the crown, which eventually tapers extending downwards towards the back and sides of the head.

This haircut features a prominent partition on the sides, where the hair is thicker. Gradually thinning down when it extends downwards to the ear. This style adds professionalism and edginess, making it popular among the corporate men.

Generally comprising of an inch of hair, short taper, tapers down towards the ear. For those who hate leaving a substantial amount of hair on top, this hairstyle would be great.

Long tapers have longer hair on the top and shorter on the sides, but long enough to hide the scalp. This works best for those who like short hair but do not like cutting the sides very low.

Faint tapers generally seem to have a similar length, but a fainted taper is seen around the ears and temple. If you are someone who wants to try this look out and avoid being dramatic, then this would be the perfect style for you.

This haircut features short sides and a crown that is very long.

Another obvious difference between fade and taper is that fade haircuts have no hair on the back and sides of your head. It gets longer as you go towards the top of the head. Cutting the hair drastically lower than the taper, it is actually a type of tapering the hair. A lot of barbers go by the trick of making the sides and back of the head bald. Eventually tapering the cut, that grows and extends towards the top, giving a look that is faded. Although most faded cuts are left short, the top can be left long just like the classic tapered.

There are several different types of fades, but the most popular ones are either the low fade or the high fade. Low fade consists of a cut that is tapered which eventually extends towards the sides and the back. Whereas the high fade mostly completely fades away within two inches from the top of the head at least.

Bald fades taper down from the top and the hair on the sides along the perimeter is shaved off completely.

This haircut is thin around the temples, which also gives it the significant name. Those who want to try out a fade without being too overly dramatic, this look is perfect. It does not thin out a lot of hair.

Featuring long hair at the top with a disconnection immediately instead of fading it out gradually. The sides being typically shorter making it more dramatic at the top, giving a taper that is generally shorter in amount.

Faux hawk had longer hair in the middle, just like a Mohawk. The sides are tapered down gradually instead of being shaved completely.

Featuring a box cut towards the top most part, fading down around the head’s entire perimeter. The hair can be either tapered significantly or gradually along the perimeter. This style was considered to be a signature Hip Hop haircut during the 80s and early 90s, being back today among the teens and hipsters.

This cut features a prominent fade towards the sides.